All The News That's Fit To Print (In the Spokesman Review Newspaper) May 1, 2014

Jesse Tinsley photo
Diane Rudnick, 54, returned to the ice after more than 30 years and earned medals at the U.S. Adult Figure Skating Championships.
(Full-size photo)
Diane Rudnick may never silence the inner voice that tells her she’s certain to fail.
The self-described “chicken” walked away from a skating competition as a child and from a piano recital as an adult, both times after developing cold feet.
But Rudnick’s self-doubts couldn’t stop her from following through with her big dream, competing at the U.S. Adult Figure Skating Championships.
Rudnick not only pushed aside her fears during the event, held last month in Hyannis, Massachusetts, but she earned three medals in the Ladies Bronze IV (ages 51-60) division: first places in free skate and entertainment, and a second place in dramatic skate.
“I was very, very nervous at the competition,” the Liberty Lake 54-year-old said. “My legs were like Jell-O and I never, ever expected to walk away with three medals.”
It was quite an accomplishment for someone who tore up her right knee as a teenager, stayed off the ice for 32 years, suffered through cancer surgery four years ago and experienced the death of her father one month prior to nationals.
“She’s one of the first adults we’ve seen come through our skating community who has done well on the national scene,” said Lilac City Figure Skating Club’s Berkley Villard, Rudnick’s coach of 11/2 years.
“I remind her often that it’s her hobby and she needs to enjoy her hobby. … You have to enjoy even the days that are difficult.”
The road to nationals was long and bumpy, starting when the San Francisco native discovered the sport while attending a birthday skating party as a 9-year-old.
Rudnick begged her parents for skates and lessons, willing to catch a bus to reach the rink by 5:30 a.m.
“I got one private lesson every two weeks for 15 minutes, because that’s all we could afford,” she said.
Rudnick’s first competition, at age 11, brought out her inner scaredy-cat.
“I got cold feet and went home crying,” she said. … “I just had no nerve, so that pretty much ended my childhood skating.”
Living on her own at 18, she bought a pair of used skates and returned to the rink. She had just mastered a difficult jump and was trying to recreate it when she came down wrong on her landing knee and tore her meniscus. Rudnick had arthroscopic surgery – a rarity for the time – but returned to skating too fast and reinjured her knee.
She might have continued skating, but her skates were stolen from the trunk of her car after she moved to Seattle at age 21.
“It was like an omen, like maybe I shouldn’t skate,” Rudnick said. “So I just let it go.”
The year 2010 was a turning point for Rudnick, as she was diagnosed with early-stage breast cancer and underwent a bilateral mastectomy and reconstruction. She had just married pilot Ron Rudnick, whom she had first met on her 21st birthday, while still in California.
“We got married … about a week before I had my surgery,” she said. “I was living in Sacramento, so we had a fabulous wedding and I spent my honeymoon at Sacred Heart recovering from my surgery. Three meals a day, served in bed. It was great.”
The surgery left Rudnick sapped and led to what seemed like 18 months of nothing but reclining on the couch. During this time, an old friend told Rudnick about adult figure skating, something she didn’t know existed.
Inspired by a new pair of custom-fit boots from Harlick Skating Boots of San Carlos, California, Rudnick started skating regularly at Eagles Ice-A-Rena on Jan. 1, 2012. Someone at Harlick had told Rudnick about Villard, and the two soon met and hit it off.
“The biggest thing is I have a passion for skating, and when you find someone else who has passion for it you combine it and work together,” Villard said.
Rudnick tested her competitive abilities in early March at sectionals in Ontario, California. A second-place finish in her second skate gave her encouragement.
Right after sectionals, Rudnick discovered that her father had suffered a stroke. She rushed to Oroville, California, to be with him before he died, and the hectic time kept her off the ice for 3 weeks with nationals closing in.
“When I got back on the ice, I could barely turn around and go backward,” she said.
Nevertheless, Rudnick conquered the layoff and her jitters, gaining confidence at nationals as she realized that the other skaters were just as nervous – and just as supportive.
“About the middle of (the third) program, I was gliding along and I thought, ‘This is nice.’” Rudnick said. “I even looked up at the audience and made eye contact with people.”
Now Rudnick is moving up from the bronze to the silver level, intent on next year’s nationals in Salt Lake City. Silver requires more and cleaner jumps, done in combinations.
“It really depends on Diane, and how much effort she wants to put into it and time on the ice and strength training,” Villard said.
“The story of my life is that I’ve chickened out at a lot of things,” Rudnick said. “But this was on my bucket list.” 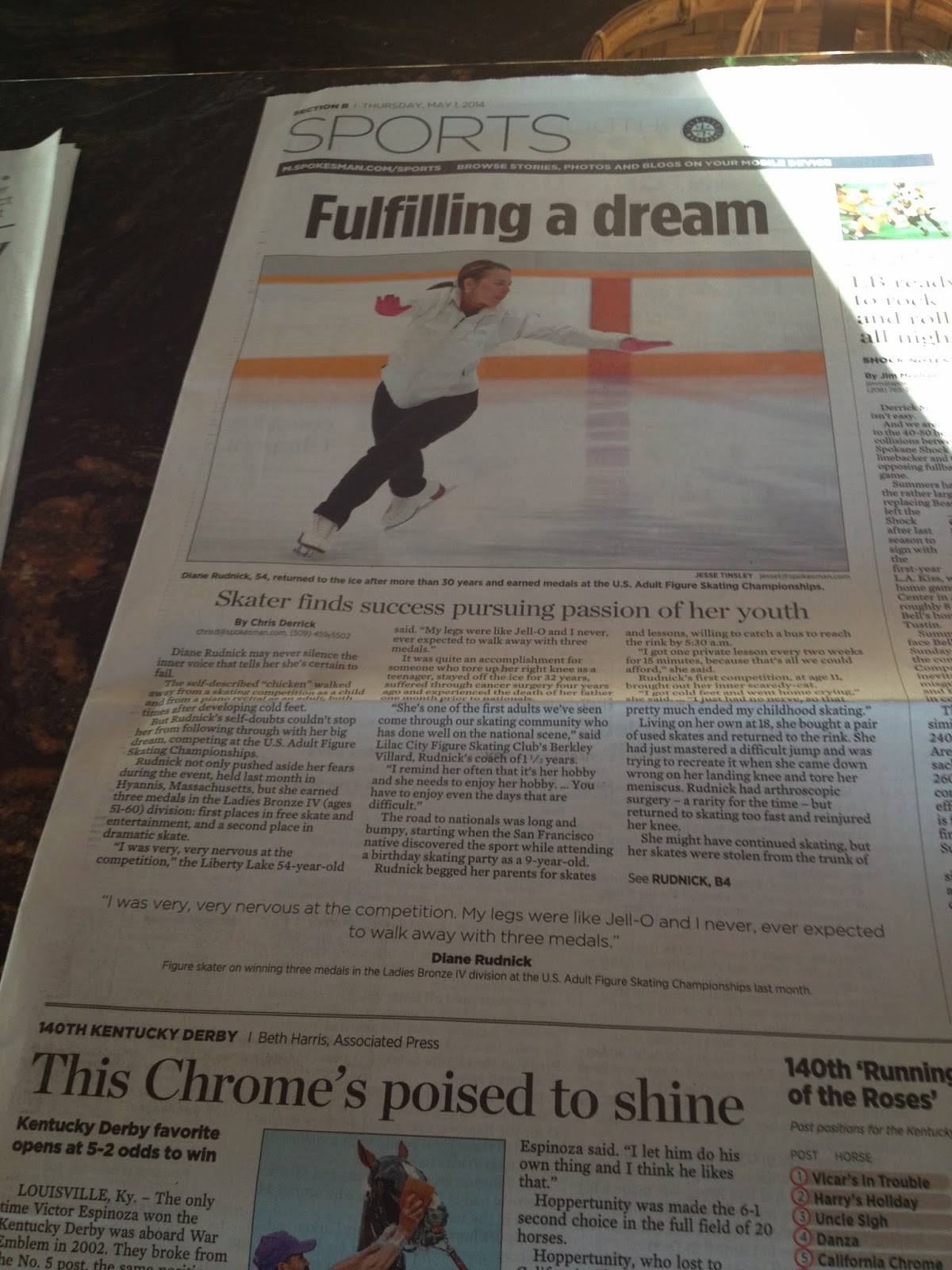 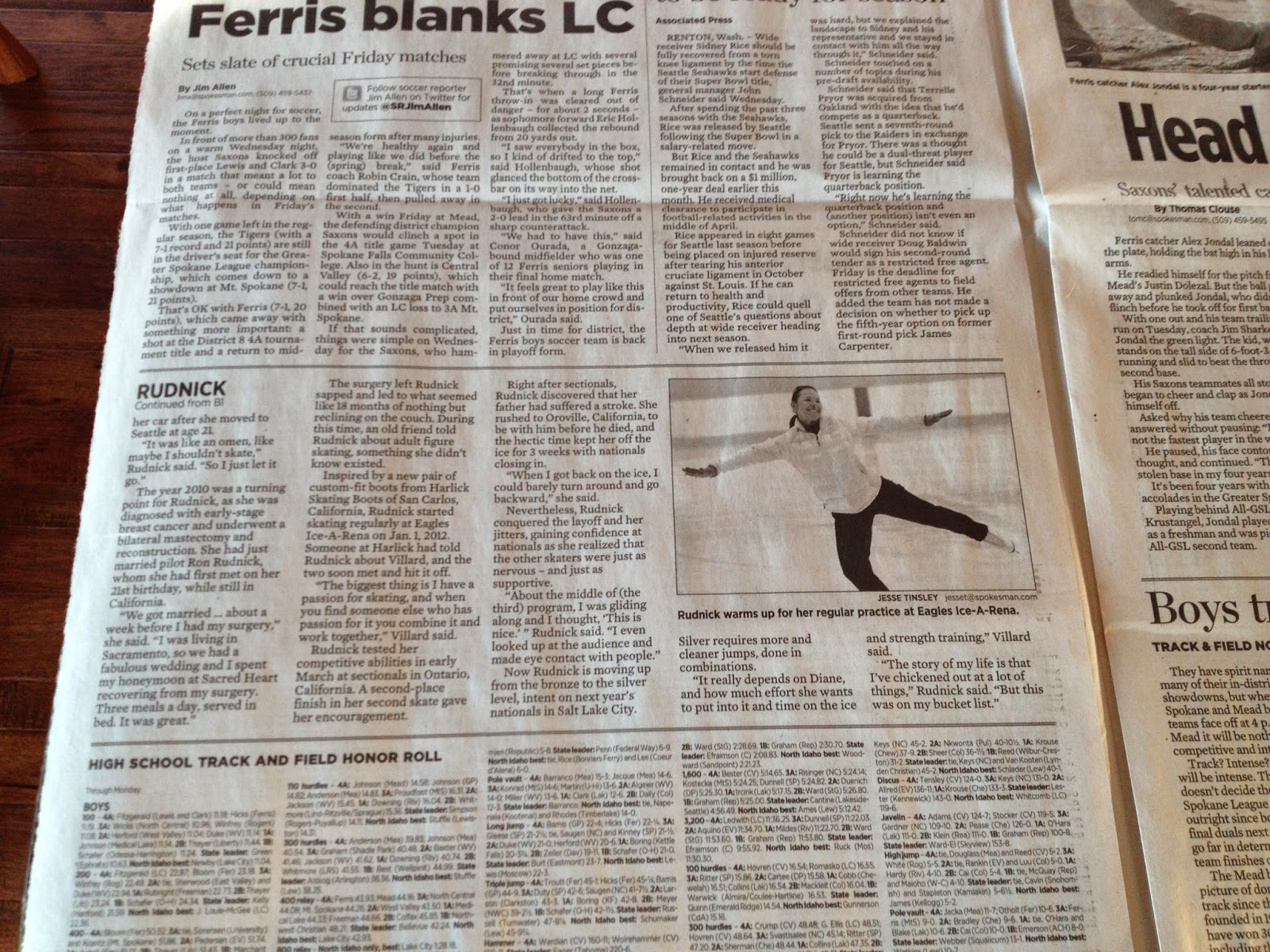