Went to my first skating competition (other than US Nationals in Spokane) in 40+ years.
My skating friend Micah was competing at the Adult Silver level.  She and I share the ice at a public session most days and I have been watching her work hard on her program since the beginning of the year.

I don't actually know what the results were.  She skated against one other Adult Skater.  I thought she did really well.  She landed her Axel and her Loop/Loop combination. 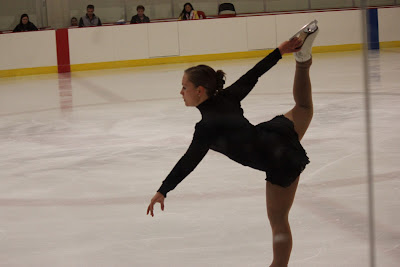 It was really interesting to watch this level of skating at a live competition.  Most of the skaters I saw were kids (of course) Preliminary and Non-Test.  There was only one group of adults when I was there.  My friend (pictured above) and another skater in the Ladies Silver Event.  There was one entry in the Mens Silver Event (he was also a judge)!!

I took my husband as well.  I tried to explain everything I could to him about levels of skating, etc.  During the short 2 hours we were there, he saw 2 different skaters competing fall really hard on the ice and have to stop their programs and get help up off the ice...
... both girls were ok.  One fell on the back of her head.  Another fell forward and landed face down on the ice.  She was an Intermediate skater.  They stopped her music and allowed her for finish out the last 30 seconds of her program.  It made me once again ask myself ... WHY I am doing this.

Last night hubby and I attended a Venetian Masquerade Ball.  A benefit for the Spokane Symphony.  We had a blast dancing up a storm with the swing band called "Six Foot Swing" that played for us at our wedding May 1, 2010. 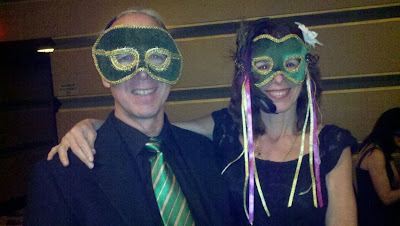