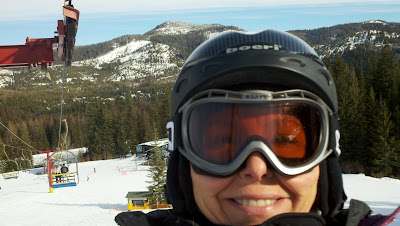 I gave my ankle a rest yesterday.  Instead of skating for 90 minutes I went skiing for 3 1/2 hours!  My legs were tired and shaky today.

I laced up and skated for an hour before my lesson.  While doing back crossovers I somehow managed to tangle up my blades and I went down like a building being demolished by dynamite.  I came to rest (after sliding a ways) on my side with snow up and down my entire right leg and right arm.  I guess that's why my shoulder hurt so bad!  There is nothing fun about falling when you least expect it.  There is nothing fun about falling anytime, but in skating falls are inevitable as you learn new elements, jumps and spins.  The accidental klutzy falls seem to hurt much worse.

My coach Berkley came out for my lesson at 12:30 and was anxious to see my new boots and blades.  She recently got herself a new pair from the same manufacturer, Harlick.
She watched me lace up my boots and discovered that I had already put a healthy crease in the tongue of my boots from the manner I was lacing up.  I guess I had a tendency to lay the laces from both the 1st and 2nd hooks into the same part of the tongue, one on top of the other instead of separating them and giving them space in between.  She recommended that I always try to give space in between and cross them a bit less uniform.  She warned me I might get "lace bite".  It sounds terrible.  I already have an inflamed tendon in my left ankle.  I thought it was from my boots being too loose and my ankles compensating to keep me balanced.

Below was the .99 cent cure.  They sell "lace bite" gel pads online for $29.99 or...
you can stick gloves between the laces and the tongue for the final hook lacing to help aid in spreading the laces over the area and preventing a permanent crease in my tongue in one place. 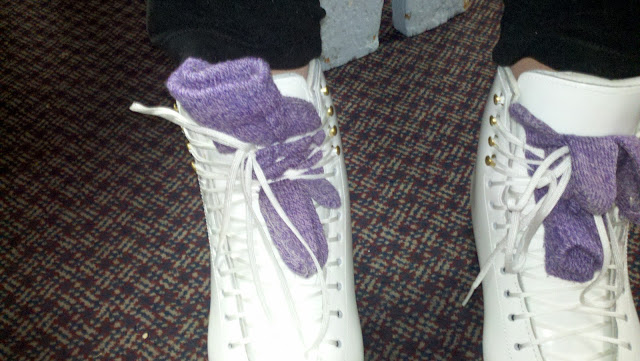 Last week I found out that the next TEST DATE is March 30, 2012.  I didn't think I should try to do 2 tests on one day.  I could probably pass the Bronze Moves in the Field, but I would have to apply to test on the Bronze Moves on a contingency basis.  If I did not pass the Pre Bronze for some reason,  I would lose the opportunity to test Bronze and lose the $40 test fee.  Better to go out there confident and pass my first two tests at the same level.
After all.... I did totally chicken out (see paragraph 7) the last time I tried to free skate a test 41 years ago!  I hope to rectify that next time.

Today my coach wanted to see if I could do the elements required in the free skate.


The purpose of this test is to encourage beginning adult skaters to learn the fundamentals of free skating. No great deal of technical ability, carriage or flow is expected. The candidate must show knowledge of the elements, fairly good edges and some evidence of good form. The following technical elements are to be skated individually, without music.
Jumps:Two different jumps, either one-half or one full revolution Spins:
Steps:
The entire test will be marked on a “pass” or “retry” basis and individual marks will not be awarded. The “pass” or “retry” will be arrived at by consideration of the composite of each element in relation to the whole. The judge-in-charge may request a retry of two different elements, if necessary, upon the request of a member of the judging panel, should it potentially change the overall evaluation of the test from a “retry” to a “pass.”
Judging panel required: One or three bronze or higher rank singles/pairs judges.


My lesson is only 15 minutes, so she wasted no time.  As soon as my skates were laced up with Lilac gloves under the laces, we took to the ice and she said, "let's work on jumps".

This surprised the heck out of me because my blades are only temporarily mounted and I have only skated on them twice.  I think she figured that the level of my jumping was not going to knock the blades off.  She was probably right!

We worked on 3 jumps today:

Next we tackled 2 spins:


Normally when I practice I put my "notes to self" in red next to the description of what I am attempting, but today I was just happy to get through it all without falling on my head!

So today it's official.  I filled out my test application and paid my fees. 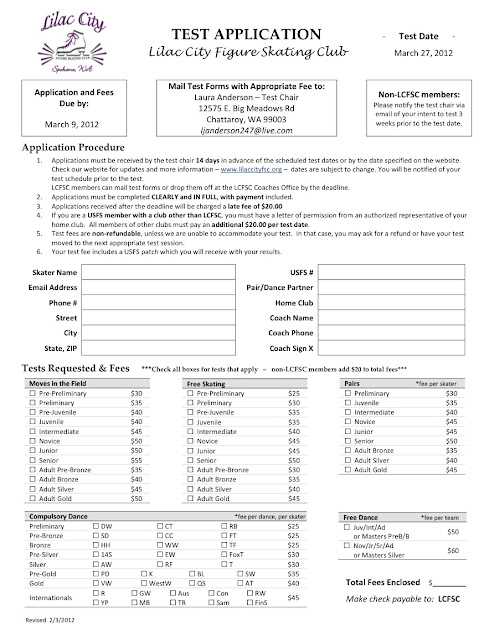